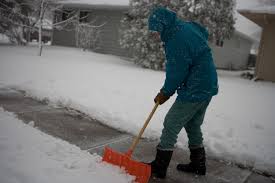 Yesterday’s downfall laid a white blanket across Omaha neighborhoods. Now, if you fail to clear walkways in front of your home, the city bills you the cost of doing it themselves.

Though, to clarify, the city employs private contractors to complete the task. Shoveling fines pay the tab accrued by hiring these companies to remove snow from sidewalks.

Some residents perhaps recall once paying a local neighborhood youth a nominal fee for the service. The shoveling fines likely multiply that charge several times over.

Historically, the city use of private contractors to shovel sidewalks imposed bills of $300 to $700 dollars for Omaha homeowners. Those with lengthier sidewalks paid in excess of that. Though a fix to the ordinance forced Public Works to charge market rate, residents can still expect to pay hundreds.

Effectively, the ordinance kicks in when neighbors report one another to either Public Works or the Mayor’s Hotline. Once reported, the city posts notice on a property, usually placed on the front door of a property.

If a homeowner fails to heed the written warning before the city’s hired contractors complete the work, the homeowner gets stuck with the bill.

The first written warnings went out Tuesday to some 30 homeowners. While the city hasn’t yet sent out their contractors to clean up the snow accumulation, property owners should expect them soon.

Cheaper contractor bids lower the prices this year. However, when years past saw residents paying nearly $1000 for sidewalk shoveling, a lower price may still be a financial hit.

Senators are Seeking a Special Session to Ban Vaccine Mandates