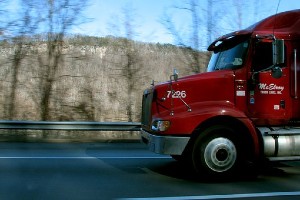 Semi-trucks come under fire constantly. They’re big, slow and when two are side-by-side on the highway, good luck getting around them. Unfortunately for many drivers, they tend to focus on semi-trucks over other impactive road issues. This comes at a loss and creates a stigma for the trucking industry. The answer is that they’re probably safer drivers than you.

60% of utility van drivers hate their jobs. Their vans are slow, they don’t have the necessary windows to be considered safe and they don’t really care. Driving isn’t their specialty in the same way that a semi-truck driver is. Getting stuck behind one of these guys when getting on the highway can be troublesome when you can’t get up to speed. Not to mention the number of tools and other objects that, if they aren’t properly secured can cause massive problems for unsafe roads.

Everyone has seen this guy. He’s got some rickety old beat-to-heck pickup truck, maybe he has a couple loading features on the back, but man, he is carrying WAY more wood than his truck can handle. Look, it’s even weighing down the back so much that his struts are practically slamming the underbody of it. I hope he takes care of securing all his equipment better than they take care of their car. We get it, the guys running some sort of handyman business, but I’m not sure who is paying him (or not) with a truck like that.

We sometimes give old people the benefit of the doubt cause, well, they’re old. They don’t know what they’re doing and we feel bad. But statistically speaking, these people have a way higher crash rating. If they spent their whole lives accident-free then their time is soon-to-come. If they are driving an old Crown-Vic, a Lincoln Towncar, or a Mercedes Benz 300D, then lookout. They aren’t as sharp as they used to be and it’s up to you to have a better judgment on things.

Drivers come in every shape and form. Some believe that getting behind the wheel after a couple of beers is not a big deal, some simply can’t drive to the standards of Federal roads. Whatever the case may be, they pose the largest threat to drivers when they get behind the wheel. That utility van in front is too slow? They quickly merge into the other lane out of frustration, this can easily cause more accidents than the utility van ever could. Trying to zip past a semi? Well, look out, passing in the slow lane leads to some of the worst accidents. Stuck behind an old lady driving her car? You just gotta take your time. The idea is to be a safer driver and sometimes that requires patience.

Semi-Trucks and Their Drivers Are Trained For Safety.

Semi-truck drivers understand that they are huge, slow and are hauling a lot of products. They also know that if they are not on-point then a life-threatening accident can happen. Each truck driver has the requirement of carefully studying the safest methods for transporting goods across the US and will not be allowed to drive if these requirements are not met. Unlike literally any other motor vehicle operator, they have standards that need to be met in order to make the world a safer place. Next time you’re “stuck behind” a semi-truck, think to yourself, am I the bad driver in this situation? Chances are, yes.

‘I apologize to my wife and son’, State Senator Mike McDonnell Said After DUI Arrest

Watch Out for Semi-Trucks on Winter Roads