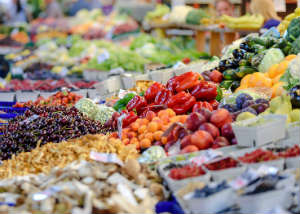 FREMONT, NE – Finally, after dealing with flooded and blocked highways since Friday, semi-trucks delivered food to Fremont! At least two of the local grocery stores received the goods – much needed at this point. The pack of semi-trucks, nine of them in total, made the journey from Omaha to Fremont. They arrived in Fremont around 7:30 p.m. on Sunday evening.

In fact, the city expected another nine trucks to arrive with loads of food by Monday afternoon. According to a driver for FirstFleet (of Murfreesboro, TN), Brian Helmer, six trucks unloaded on Monday morning at Baker’s. Each truck had about 45,000 pounds of product inside.

These convoys of trucks are part of an effort to get supplies to Fremont, which is needed at this time. As a result of flood waters, major highways have been blocked since Friday.

The conditions of the Fremont flood only got worse as the days went by. In fact, the community needed the help of shelters. Five shelters now are helping those who had to evacuate. These shelters are located at First Lutheran, Salem and Trinity Lutheran churches. In addition, they are at Fremont Nazarene Church, as well as Fremont Middle School.

HyVee has been feeding people within the shelters, with some help from the Red Cross. As a result, HyVee’s supplies dwindled. This led to the need for the shipments of supplies from Omaha. The company worked along with the Nebraska State Patrol, the National Guard, and the Nebraska Department of Transportation.

They worked together to get a route from Omaha into Fremont. The roads are not open for public use at this time, as they are still too dangerous. To get through the flood and mud, they had to plow a route there. But now, luckily, the supplies brought relief to the shelters during these difficult circumstances.

A Pedestrian Killed on I-680 after a Semi Crashed