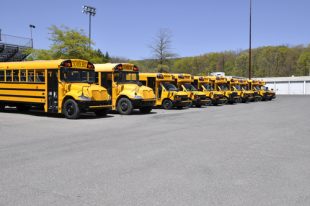 OMAHA, Nebraska — Omaha police cited a school bus driver for failing to yield after a bus crashed, rolled through a fence and down a hill, stopping inches away from a high voltage transformer Wednesday afternoon.

In a police report obtained by the local news Thursday morning, police identified the driver as Erin Heming, 58.

According to the report, Heming told police she was attempting to turn left onto Fort Street from 108th Street. She said she had a green light and did not see anyone coming. As she made her turn, she told police a truck hit her, causing her to spin around and hit a third vehicle before going off the road.

The driver of the truck told police he was driving southbound on 108th Street when the bus pulled out in front of him, causing the vehicles to collide.

At that time, 14 students were on the bus at the time of the crash. All of them went to the hospitals a precaution and are ok this morning. Heming was also taken to Nebraska Medicine to be treated as a precaution.

Previously:  14 Adams Elementary School students and their bus driver are alright after the school bus they were on rolled through a fence, down a hill and stopped just inches away from a high voltage transformer Wednesday afternoon near 108th and Fort streets.

Omaha police have not yet confirmed who’s at fault or what led up to the crash around 3:45 p.m. Witnesses and first responders said it could have been a disaster, but the bus driver somehow avoided rolling and hitting the high voltage equipment.