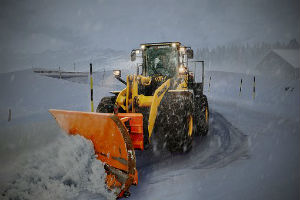 You know it’s been a long, brutal winter when the public works departments in your city start rationing road salt. There’s a joke in there somewhere. Unfortunately, this is actually happening in Omaha.

Believe it or not, Omaha is getting stingy with their road salt until additional shipments arrive. After a series of heavy snowstorms blasted the city, reserves are low.

Traditionally, Omaha gets its salt from mines in Hutchinson, Kansas. However, because it and surrounding cities are also enduring a hard winter, they’re using extra salt. Bottom line, it’s a logistical nightmare and the mineral can only be shipped so fast.

According to Austin Rowser, Omaha’s street maintenance engineer, “it’s all contingent on trucking.”

Rowser points out that in a normal winter Omaha uses 30,000 tons of salt. Unfortunately, this season road crews have already dispersed an amount exceeding 50,000 tons. That’s a lot of salt on Omaha streets.

As of Friday, the city still had about 5,000 tons of salt which Rowser emphasized was just an okay amount. For the year, Omaha had earmarked roughly $1.5 million for salt.

Papillion spokesperson, Trent Albers, indicated that the city has enough salt left to handle around three more storms. Currently, they are waiting for a shipment of 650 tons. Albers stressed that the shipments haven’t been coming quickly.

In order to preserve its salt reserves, Papillion is using a combination of gravel and salt and a de-icing chemical. Yep, things have gotten that bad.

Joe Soucie, La Vista’s Public Works Director, says they’ve got enough salt on hand for two or more garden-variety snowstorms. Though nothing about this winter has been typical. The city is expecting a shipment of salt in the next week.

Soucie remarked that in the past his city has borrowed salt from nearby communities. Right now things aren’t that desperate. Even still, nobody wants another round of blizzards.

Unfortunately, winter isn’t going quietly in that good night. Snow is expected on Saturday afternoon. Plus, March is supposed to remain colder than normal through the opening weeks of March.

Semi-Trucks: Are They The Neusence? No

Drake Has A Gothic-Looking Rolls-Royce. Care For A Tour?