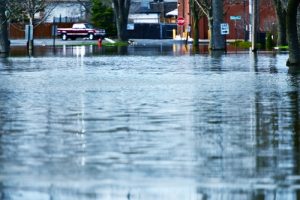 Gering, NE- While locals of Douglas and Sarpy County were expecting temperatures of the high 80’s on Tuesday, heavy rainfall and thunderstorm are what they got instead, causing the flood in the area. Some areas also got hail.

The weather channel had notified people to expect the flood until around noon.

Certain streets, like Northbound 114th, had been shut down for a bit.

The rain was so heavy last weekend that it also caused a school to flood in the Nebraska Panhandle.

Gering area got up to 9 inches of rain. The city got rainfall Friday night all the way through Saturday.

In Gering High School, the boiler room had 6 feet of water! They basically got a pool in the room from the amount of rain there was.

The water leaked into the building from the utility tunnels, which are made for renovation purposes.

The weather channel reported expecting warmer and sunny weather, starting from Wednesday until Friday during the day.

However, more rain and thunderstorms should be expected on both Thursday and Friday evening.

But, great news! The weekend is expecting to have warmer and rain-free days, with the weather being in the high 80’s.

Project NExT will Receive $93 Million for Expansion at a University